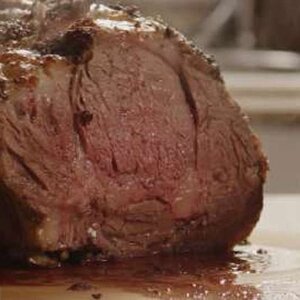 Prime Rib’s exact origin and beginnings is unclear, although most historians agree roasts became popular during the Industrial Revolution in the United Kingdom, Australia, Ireland, Canada, New Zealand, and USA.

Prime Rib was originally known as the “Standing Rib Roast”. As meat butchering standards improved in the late 19th century, more people were able to enjoy a hearty beef dinner. Various cuts of meat are more popular than others, but the Prime Rib section has been one of the long standing choices for beef connoisseurs.

The following is a diagram of beef cuts:

Those from British or Irish households will recognize a prime rib meal as a “Sunday Roast”. Some Sunday Roasts include other meats: pork, chicken, or lamb as accompaniments.

This meal is commonly served with mashed or baked potatoes, Yorkshire Pudding, stuffing, vegetables, and gravy. Many families consider the Sunday Roast an important tradition, set aside for the afternoon after morning church services have concluded. Now, regardless of ethnic origin, many people set aside Sunday as “Family Dinner Night”, a great way to bring everyone together in our increasingly electronic and socially isolated world.